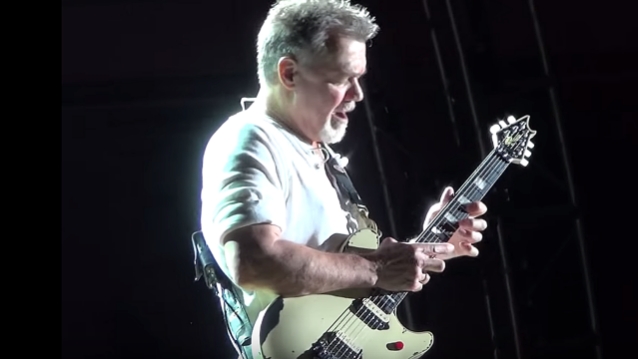 It’s unwise to judge someone on the basis of a 30-minute phone call. Over the course of my long career, I conservatively estimate that I’ve done about 4,000 phone interviews with musicians. I can count on the fingers of one hand how many of those conversations left me feeling like I’d been talking to a real jerk. And that total would include two interviews each with Ted Nugent and Gene Simmons.

One of the better ones was Eddie Van Halen.

This was maybe 15 or 20 years ago. He was relaxed, funny, eager to talk, a regular guy. Like someone you’d hang with. And he gave me one of my all-time favorite stories from an interview.

As Van Halen told it, he and a few other folks, including his then-wife Valerie Bertinelli, had rented an Atlantic Ocean beach cottage owned by the theater and film-score composer Marvin Hamlisch. Over the course of a month or two, they were partying pretty heavily. And as they were getting ready to move on, Van Halen said he was worried about the condition of the grand piano in the living room. They’d been using it as a table for their drinks over the course of many evenings. Now the instrument’s lid was marred by dozens of cocktail-glass rings.

Consumed by guilt, Van Halen hired a woodworker to come out to the house, to sand and re-finish the piano lid. Hamlisch never knew.

That’s what I remembered of Eddie Van Halen when I heard on Monday that he had died of cancer at age 65. Not the amazing electric guitar solos, or the hit songs. I thought about a millionaire musician fretting over having wrecked the finish on Marvin Hamlisch’s piano. In the grand universe of careless acts, maybe not such a big deal. But, for the duration of that half-hour conversation, Van Halen was a man with a conscience, he was a decent guy.

Musicians, they give you the straight talk. Sometimes it’s funny. A little self-deprecating.

And sometimes, it’s a little scary. Musicians are the hurricane bells of society. Ringing plaintively, and with increasing urgency, as the winds escalate.

That wasn’t in the forecast when I was in Austin, Texas, probably around 2008 or so, for the South by Southwest Music Conference. It was a beautiful March afternoon. The best time to be in Austin. I was in an alley behind a funky art gallery called the Yard Dog. Bloodshot Records, a Chicago-based label of mostly alt-country hellbellies, was putting on a showcase of its musicians. They each got 30-minute sets. Maybe 45 minutes, if they were already a proven cool commodity, like The Waco Brothers.

People were drifting around the alley, slipping around the small stage, sipping beer from plastic cups, examining each others’ tattoos. A few dogs wandered in and out. I was standing in front of the stage waiting for the next act. I greatly admire Steve Earle, and someone suggested I might want to be there, at that moment, to check out Earle’s kid. Justin Townes Earle.

Standing next to me was a tall guy in a sharp-looking, powder blue, western-cut suit. A lot of these rockabilly types go all out with the vintage clothing, thick-framed Buddy Holly eyeglasses and carefully retro hairstyles. I don’t recall if I said anything to the guy, we were just nursing our beers and waiting. Then the day’s emcee walked onstage and gave the usual “Let’s have a big hand for Justin Townes Earle” intro. And the guy in the powder-blue suit and Buddy Holly glasses stepped up onto the stage.

So now I was a fan of both Earles. 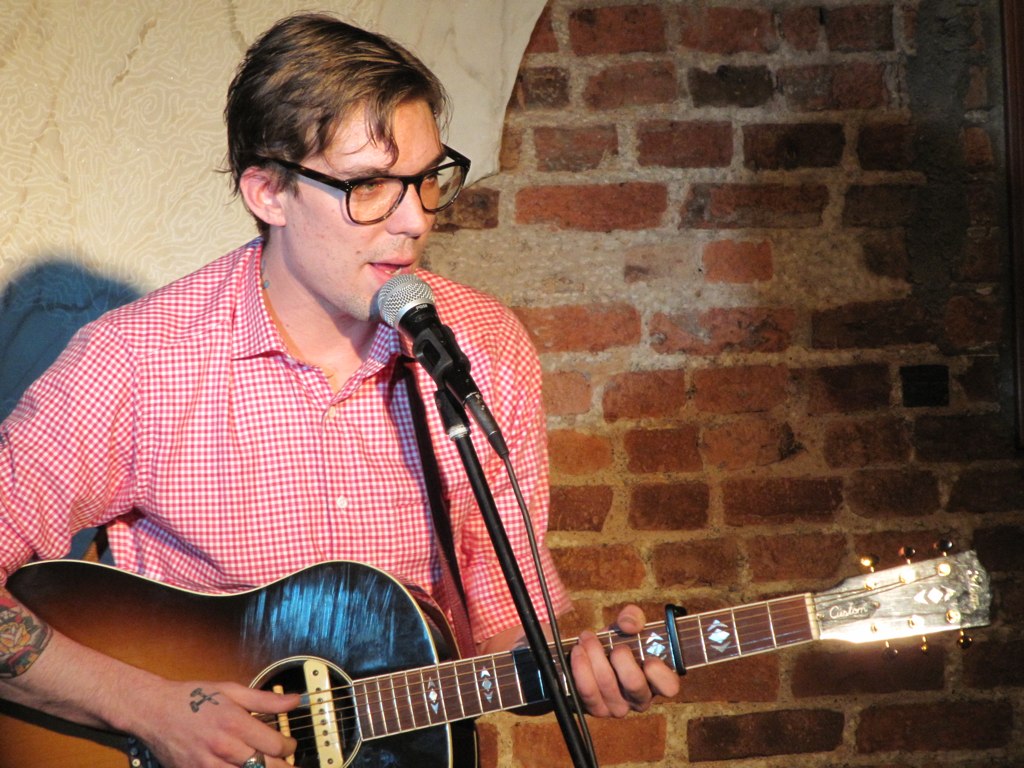 The conventional wisdom suggests that Justin was fruit that didn’t fall far from the tree. That could be true, but it depends on what landscape you’re looking at.

In some ways, they seemed such opposites. Steve Earle, in his Leo Tolstoy beard and flannel shirts. Justin Townes Earle, a clothes horse who GQ magazine would go on to name one of the “25 most stylish men in the world.”

But the similarities were a little alarming. Both had gone through periods of drug and alcohol abuse, as well as civil disobedience. Justin was 12 when he started using drugs and, as best as I could determine, he’d survived five overdoses by the time he was 21, and had been in rehab 13 times. He ended up in an Indianapolis jail in 2010 after an obscenity-fueled show ended in a brawl with the club owner and damage to some property.

Rewarding domestic partnerships did not seem to be a specialty of either man. Steve Earle – he’s been married seven or eight times to date – had left Mrs. Earle No. 3 by the time Justin was 2 years old, so the influence was perhaps negligible. Except as song fodder. “Absent father, now he never offers even a dollar,” is how Justin put it in “Single Mother,” one of those tortured compositions that seems to pour so naturally out of the Earle family songbook. “He doesn’t seem to be bothered by the fact that he’s forfeited the rights to his own now.”

Still, there was a relationship, although it sounded more professional than personal. Justin played guitar in his father’s band for a while, and they appeared together in an episode of HBO’s “Treme.”

Justin had been releasing some excellent albums by the time he was booked for a show at Rochester’s Water Street Music Hall in 2014. I set up an interview and did the usual research that journalists do these days, checking out his Twitter account. I saw that Earle was fuming over the police shooting of Michael Brown, an unarmed Black 18-year-old in Ferguson, Missouri.

When I got Earle on the phone, I asked him about it.

“I grew up in a neighborhood where the police liked to harass us, they had definite reason to be scared,” he said. Earle figured some of them were returning vets whose thank-you for their patriotism was Post-traumatic Stress Disorder. As Earle watched the Ferguson news, the conflict that he witnessed while growing up in Nashville still resonated.

“There was a lot of separation between races there, Black and white,” he told me. “People who support the police, who don’t say anything, they’re from all-white suburbs. They didn’t go to school with Black people. If they did, it was like a token thing. The police are so disrespectful to common people now. I’ve been beaten up by cops, a lot my friends were severely injured by cops. We’re all Americans. This militarized America, this killing of unarmed Americans is absolutely out of this world to me.”

Remember, this conversation took place six years ago. Nothing’s changed. You could substitute a dozen or two names in place of Michael Brown. A dozen or two towns for Ferguson.

It’s a hard world that fuels hard-times troubadours like Steve Earle and Justin Townes Earle. Steve’s songs were frequently more political. But like his namesake, Townes Van Zandt, the characters in Justin’s songs were often relationship train wrecks you can’t turn away from.

Now I was talking to Justin about that latest album, “Single Mothers.”

“A lot of the songs on that album were the result of a rough time the past couple of years,” he said. “I had a really nasty breakup with a really nasty person, the kind of person who literally went around to my friends and spread a lot of bullshit.”

Earle was 32 years old by then, his soul was up for grabs, and he talked like he knew it. “I realized I can’t be the guy I was trying to be,” he said. “Which wasn’t to say I was that bad a guy. I was messy as hell, I ate dinner at 2 a.m.

“A lot has changed.”

“I wasn’t doing drugs then. I’ve always smoked reefer, but I was clean. I guess it was my relationship with women. I had lost complete faith in that idea. That I could sustain a positive relationship.”

“I took a trip to the mountains,” he said. Park City, Utah. “Disneyland for adults. I met a woman there that is amazing. I always wanted girlfriends from outside of my world. I always had a lot of faith in women like that, due to my mother.”

Sober since that dust-up and night in jail after the Indianapolis show, and the month of rehab that followed, he married that woman he met in the shadow of the Utah mountains. His first marriage. I counted it out on my fingers; he was still six behind dad. She was tattooed and tall, like Earle, but otherwise an outsider from his world.

Sometimes you just need to get away.

“Any environment will get ugly on you after a while,” he said. “When I went out West, I could breathe mountain air, see different scenery. I felt the same kind of wonderment as the first time I set foot in Manhattan and San Francisco. Driving out there, I actually saw the purple mountains majesty and the golden waves of grain. I’ve never been a pro-American person. But for the first time, I felt the beauty.”

I’ve gotta admit, that was another one of my favorite interviews. A lot different than Eddie Van Halen. Darker, for sure. But I liked the guy, and the words rang true.

But that hurricane bell can stay silent for only so long. Musicians hear it ringing for society, and they write about it. Or it’s a personal warning for a guy who doesn’t hear it. Maybe he chooses to not hear it. Maybe he hears it, and writes about it.

In August of this year, Justin Townes Earle died. He was 38. No official cause of death has been publicly announced, but the police were investigating it as a drug overdose.

Steve Earle says he’s going to record an album of his son’s music.

Sometimes you can sand down the rough edges. Throw on a nice, new finish. But you can’t always help what’s underneath.

Baron Harkonnen in the White House