In Life During Wartime, Politics, Science 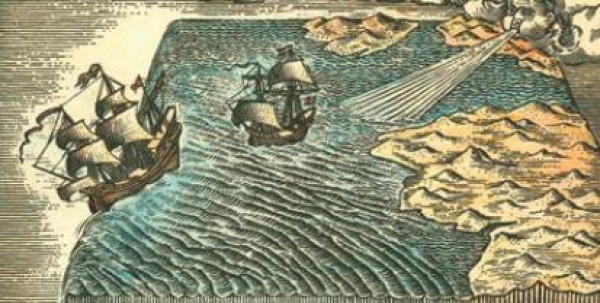 I’ve been reading too much. The cracks in my crackpot beliefs are showing. I now assign the chance of life on other planets as merely a 50/50 possibility. I’m starting to think Bigfoot may not be real since, as best we know, one’s never been hit by a pickup truck on some lonely Oregon road. The existence of ghosts seems a mathematical impossibility, because it’s been estimated that 108 billion homo sapiens have lived on the Earth over the last 50,000 years, which would make the afterlife a pretty crowded party.

Is the Earth flat? My Friend Jon re-tweeted a story about an Italian couple that recently made an earnest effort to sail to the edge of the world, which they believed to be in the Mediterranean Sea, south of Sicily.

They didn’t quite make it.

Perhaps their failure could be blamed on their compass, an ancient navigational instrument designed around the principal that the Earth is round. If there is a magnetic north, where is the south pole on a flat Earth? What would a flat Earth look like? Your sailboat arrives at the edge and … then what? A beach? And the ocean, which falls away to…?

The more-relevant question actually is: Did people ever believe that the Earth is flat? Any thoughts that we might be living on a celestial pancake is fine for people who haven’t had any reason to think hard about the question. If you’re a professional football player, a clerk in a convenience store, Italians with access to a sailboat, or a blogger with a limited readership, being a proponent of a flat Earth isn’t putting anyone in danger. I do prefer, however, that airliner navigators and the people who design communications satellites understand that this thing is round.

When beliefs evolve into the Spanish Inquisition, that’s when we have a problem. Religion has been at war with science for centuries. The acceptance of a flat Earth was a theologically convenient argument for anyone who suggested that European Catholicism wasn’t at the center of the world; Asian and African people could be pushed to the fringe of existence. The Catholic church acknowledged no other celestial model than one that depicted our world at the center of the universe because… well, that’s where God would place us.

But generally speaking, and certainly scientifically speaking, the answer is no: It is a myth that people once universally believed that the Earth is flat. Copernicus so feared defying the church that he waited until he was dying to publish his concept of the Earth as just one solar system bauble orbiting the sun. You may have learned in junior high history class that the crews on Columbus’ three sailing ships as they crossed the Atlantic were on the edge of mutiny because they feared falling off the edge of the world. In fact, the sailors were getting cranky because they were hungry and running out of water after Columbus – who knew the Earth was round – had miscalculated how long the journey might be. It was only the unexpected appearance of the Caribbean islands that saved them.

Columbus’ experience shows that the round-Earthers were not always on the mark either. The math used to calculate the possible size of the planet would often conveniently eliminate the spaces that ultimately turned out to be home to other continents – North and South America – and the people who lived there. Columbus learned of this math error first hand.

Add in the mythologies of lost continents such as Atlantis and Lemuria, and quite a cartographical shoving match emerges. The various misconceptions of the Earth throughout history can’t be laid at the feet of the geographers of that day; they did the best they could with the information at hand, and while wrestling with the politics of the church.

But what’s our excuse?

Most ancient civilizations believed we live on a round planet. Logic, and science, told them so. Yet there is reporting now that people living in the 21st century are increasingly prone to believe that the Earth is flat. Eleven million Brazilians believe so. There’s a yearly Flat Earth International Conference that was organizing a cruise for 2020 that would take believers to the rim of the Earth, and the towering ice wall that holds the ocean in place. Apparently, the cruise didn’t happen. But YouTube has lots of videos supporting flat-Earth beliefs, the internet is a pipeline for crazy. Take my word for it, don’t go there, I wasted a couple of hours of my life on it.

Logic and science aside, crank theories sometimes find breathing room long after they’ve been disproven. Such as the 19th-century suggestion that the Earth is hollow, and a sun burns at its core. Edmond Halley – who correctly predicted the return of the comet that now bears his name – saw the Earth as three concentric circles, nestled one within the next, that turned independently of one another. Cartographers created maps and globes depicting what the landscape of a Hollow Earth might look like. In the 1800s, scientific expeditions to the Hollow Earth were proposed. Edgar Allen Poe wrote a short story about it. Edgar Rice Burroughs wrote fantasy novels that took place at the Earth’s core, one of L. Frank Baum’s 13 “Oz” books has Dorothy on a journey to the planet’s interior.

Read about it in this book by David Standish: “Hollow Earth: The Long and Curious History of Imagining Strange Lands, Fantastical Creatures, Advanced Civilizations, and Marvelous Machines Below the Earth’s Surface.”

True, belief in the Hollow Earth wasn’t widespread. Certainly not as widespread as the idea that a large aquatic creature lives in Loch Ness. This, despite the assertion by marine biologists that Loch Ness is devoid of the sizeable fish population needed to keep Nessie alive.

Why would alien races from another world visit us? With the internet provided virtually anything aliens would need to know of Earth, from nuclear secrets to recipes to our television shows, the only function of UFOs visiting our planet would be tourism.

Yet as limited as the evidence is for a flat Earth, a hollow Earth, the Loch Ness monster, UFOs and fairies, people believe in them. Sometimes smart people, like Conan Doyle.

We believe in fantasy, we believe in Disneyworld. Giant mice, yes. But often, our fantasies become a danger. We don’t want to do the work to contain COVID-19. We just want a magic vaccine to take care of the problem.

So many Americans insist on personal freedom, yet they want to be led. So they follow the evidence-free claims of QAnon (Hillary Clinton is part of a child sex-trafficking ring!) despite the FBI labeling QAnon as a domestic terrorist group. They follow actor Jenny McCarthy’s insistence that vaccines cause autism, despite the advice of medical professionals. They refuse to wear masks to slow the spread of COVID-19 because it’s an affront to personal freedom, despite those same rebels having followed seatbelt laws for years to avoid being killed in a car wreck. They follow social media claims that 9/11 was an inside job. And jet contrails are actually “chemtrails,” a high-altitude conspiracy to poison Americans. Or maybe it’s a conspiracy to change the weather. No one’s ever sure what is the goal of these coverups and conspiracies. Deep State something, something…

Conspiracies that would need to rely on the silence of thousands of co-conspirators.

Studies have shown that belief in conspiracy theories is triggered by our brain’s need to latch onto structure. It’s an ancient reflex. Like Neanderthals recognizing that the shape in the darkness beyond the light of the fire that they’ve built in the mouth of their cave may be a bear crouching in the darkness. Information that could mean the difference between survival and being mauled to death.

Today, bears aren’t the problem. That threatening shape lurking in the darkness at the edge of the yard is a rhododendron. So human brains search for other problems to illuminate in this murky world. That’s an opening for the herd effect, where social acceptance, rather than independently confirmed fact, makes an idea seem real. And it’s an opening for confirmation bias, which is the search for evidence that confirms what you want to believe. And that leads us to our dependence on authority figures.

If that herd is your political party… with social acceptance set into motion by Rudy Giuliani… confirmed by an ultimate authority figure, Donald Trump…

And that’s how we arrive at 73 million people believing a presidential election is laden with fraud, despite no evidence.

That’s the hollow world in which we live. A hollow world, where nature abhors a vacuum, and fools rush in to fill it.