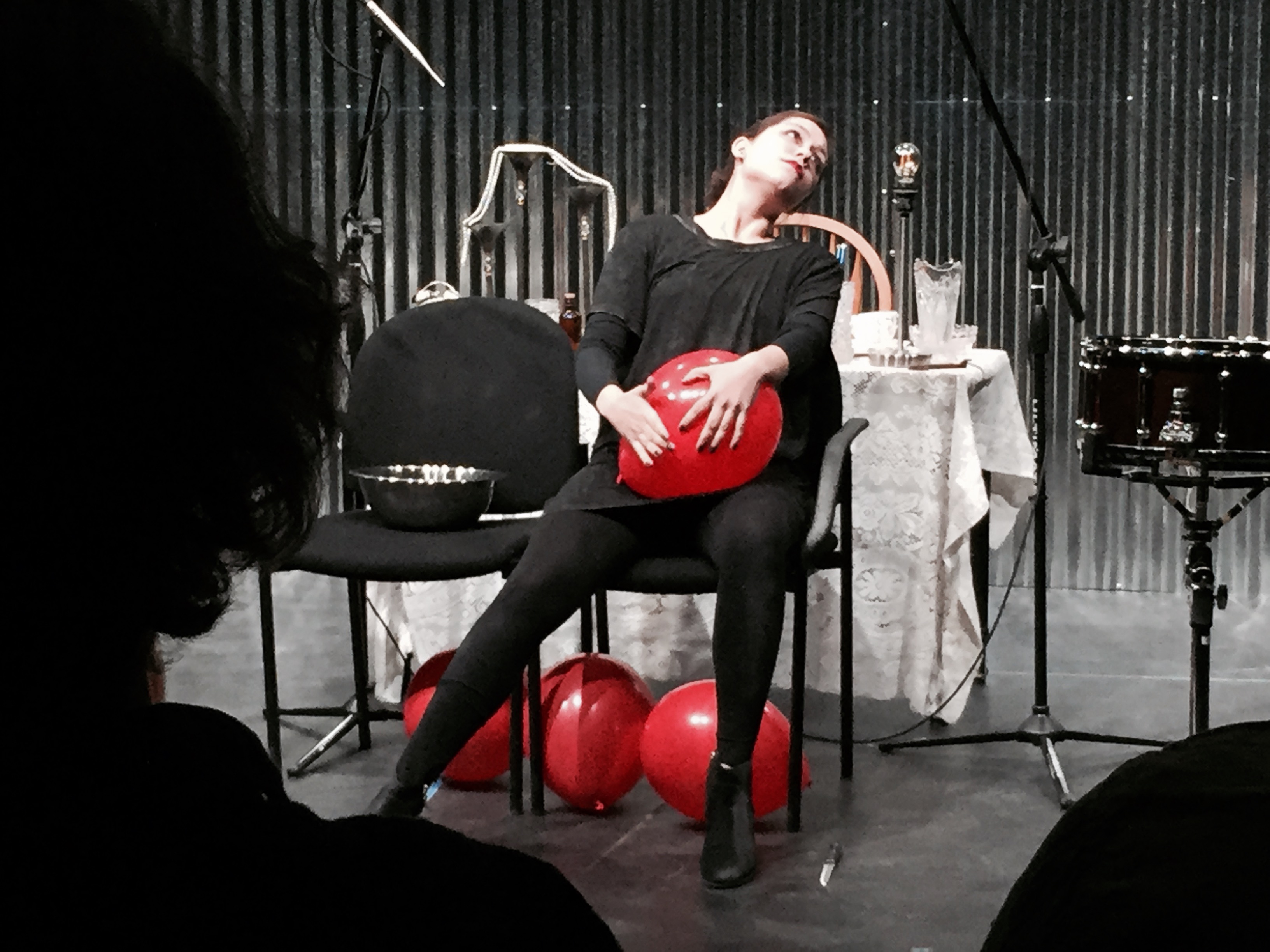 Nikki Joshi raises the knife: Oh no, we are all thinking, holding collective breath. Don’t kill it. Please don’t stab… that red balloon.

And then, to the relief of the audience, about 25 of us in a darkened Todd Theater on the University of Rochester campus, Joshi spares the red balloon.

This is theater percussion, and a piece called “Scratch,” by the avant-garde Norwegian composer Rolf Wallin. Avant-garde is the operating phrase on this Friday night. You don’t wander into a local music club and find this kind of stuff: a woman in punk black plucking petals from a red rose and dropping them into water-filled bowls, which she taps with sticks, eliciting a different pitch from each different-sized bowl. No, you must seek out these curiosities. A darkened theater on a college campus, that’s a good place to start.

Joshi, a Toronto musician, plays chimes to several portions of California composer Christopher Adler’s “Zaum Box,” in which she chirps Russian Futurist poetry. She moves on to Annea Lockwood’s “Amazonia,” a work by the New Zealand-born composer, now teaching at Vassar College. A piece for snare drum, Joshi drags a mallet across the drum head to produce a disagreeable growl, taps the sides of the drum, then loosens the drum from its stand and sets a few marbles on it, tipping the drum so they roll around the edge like a ball on a roulette wheel. She adds vocals, like a purring cat.

All the time, I tell myself, it’s important to remember: Don’t over-analyze this. Just go with it. These pieces are nothing that can be danced to, but I know a lot of drummers whose world would be turned upside-down by this exhibition. Sound that challenges expectations. These are no verse-chorus-verse compositions. You only know the piece has been completed when Joshi looks up at the audience and smiles.

She moves on to the Greek composer Georges Aperghis’ “Le Corps Á Corps,” sitting cross-legged on the floor with an African djembe, reciting words inspired by a manic motorcycle race: The words pour out in a staccato speed chatter, a violent struggle of gasping poetry:

Before ten o’clock, around the body, they were already dispersed all along the track, on both sides, packed shoulder to shoulder. The only visible actions occurred at the finish line, from which from time to time a chariot emerged – seizing the shining helmet, leaping up, injuring his arm – blasting out of the cloud of dust, and staggering down from his motorcycle, which the maintenance team rushed to refuel and launch back onto the track, with a brand new rider on it. From the fresh wound on his arm the blood flows. Immense cries arise.

Joshi stands, smiles, and bows. Now we know the piece is over. Time for a break, before the main event: A performance of Eastman School of Music professor Matt Curlee’s interpretation of Charlotte Perkins Gilman’s intense 1890 Gothic interior-decorating horror story, “The Yellow Wallpaper.”

This piece will require some explanation. And for that, up steps Jessica Lacher-Feldman, assistant dean of the UR’s Department of Rare Books, Special Collections, and Preservation. She talks about “the connection between archives and the arts,” and the importance of “connecting people with stuff.” Archives, she says, are jumping-off points, or entry points, to creativity. She points to her own archival research into the 1954 novel “The Bad Seed,” by William March. Exploring his notes, she discovered the back story of this tale of a murderous little girl: Much of March’s inspiration for “The Bad Seed” was drawn from detective magazines.

Accessing archives for a work at hand raises the interpretation to a visceral level. You can smell it, listen to it, Lacher-Feldman says. And so it is with “The Yellow Wallpaper.”

The story is told in the form of journal entries, inspired by Gilman’s own claustrophobic existence after she is confined to a room by her husband and doctors’ misogynistic solutions to what they diagnose as a woman’s “temporary nervous depression.”

Curlee calls this “a found-object piece,” built from thrift-store acquisitions. Wearing a black Victorian dress, and often with a maniacal expression on her face, Joshi rummages through a life spread out on a desk. Her percussion raises the drama of Gilman’s words, as she rattles the pills in a bottle and her strings of pearls, beats on glass bottles and vases and candlesticks, tickles them with her fingernails, and speaks into a pewter pitcher, then snuggles with it as though the pitcher were a baby – post-partum depression. She rages against the men who are imprisoning her on a medical pretext. But her words always return to the wallpaper, and her examination of its patterns. Soon, she believes she sees a woman behind the paper’s intricate patterns. “I fancy it is the paper that keeps her so still,” she says. And then, the paper moves because the women crawling behind the pattern is shaking it.

We know wallpaper is a traditionally dangerous interior-design choice in the literary world. The last words of Oscar Wilde were supposedly something along the lines of, “This wallpaper and I are fighting a duel to the death. Either it goes or I do.”

The story of those being Wilde’s last words is probably fiction, as is “The Yellow Wallpaper.” Yet the imprisoned woman tearing down the wallpaper is a handy metaphor. “She’s taking charge of her own life,” Lacher-Feldman says. As Gilman did in real life. The UR recently acquired a collection of Gilman’s letters and illustrations, and they show someone who was much more than a woman marginalized by the men around her; she escaped her demons to become a writer, commercial artist, editor and lecturer.

So the story has a feminist direction. And was ahead of what was commonly produced in its time. More than a century after “The Yellow Wallpaper” was published, it’s the idea of a woman taking charge of her life – even in the face of a debilitating mental illness – that resonates today. To the point, Lacher-Feldman says, that the University of Rochester is developing a class in which “The Yellow Wallpaper” will help explore women and their reproductive rights.