How James McMurtry and Mitt Romney see, and don’t see, the poor 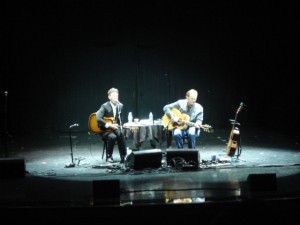 Lyle Lovett and John Hiatt live on the high seas.

Here’s how much Sunday’s John Prine show got to me: Monday morning at breakfast I was assembling a fist-sized pile of smoked salmon at the breakfast buffet while singing to myself, “I am an old woman….”

It’s now Wednesday, Day Four of the Cayamo music cruise through the Caribbean. The music has been crazy and beautiful. We’ve already seen Lyle Lovett and John Hiatt performing their two-man, songwriters-in-the-round thing, joined for a bit by fiddler Sara Watkins of Nickel Creek. James McMurtry dedicated his Oklahoma white-trash epic “Choctaw Bingo” to “The First United Crystal Methodist Church.” McMurtry finished his set with “We Can’t Make it Here Anymore,” his ode to the working man cut adrift by this economy. The guy sitting on the floor nearby looked our way and shouted of the roars of approval, “ ‘I don’t care about the very poor.’ ” That’s a Mitt Romney quote, as you know.

You could get a pretty good argument going as to who looks more out of place on a cruise ship, McMurtry or Greg Brown. You don’t expect to see such weedy-looking guys walking around the pool deck unless they have a wrench in their hands, disappearing behind some unmarked door. Prine brought out Brown’s wife, Iris Dement, for duets on “In Spite of Ourselves” and “Muhlenburg County.” What a great hillbilly voice she has. I mean that as a compliment. Loudon Wainwright III continued with his amusing themes of “death and decay” and “shitty love.” The Civil Wars were the biggest surprise, a charismatic duo blending imaginative harmonies with very unusual songwriting. But Lucinda Williams was no surprise. She’s a blonde again, if you’re keeping score, and brought out Jim Lauderdale and Buddy Miller to help her “Get Right With God.” We’ve been hearing so much great music, it’s easy for an audience to sit back and say, “Yeah, here’s another good one.” But Williams had that crowd up and out of its comfy seats, howling.

Williams said her manager had to actually go into her cabin at 5:30 in the afternoon to wake her up for her 8 p.m. show. It’s easy to sleep here. Almost too easy.

Yet I live in fear of missing something. Richard Thompson described his band as a “folk power trio” that fell “somewhere between The Jimi Hendrix Experience and Peter, Paul & Mary.” The former far more than the latter, as they rocked the boat with what Thompson described as a new genre of music, “death lounge.” Then, mindful of what cruise line we were on, he amended that to “Norwegian death lounge.”

Hermetically sealed on a cruise ship with three dozen musical acts. I haven’t even seen Keb’ Mo’ or Enter the Haggis yet. In the spa, we walked around in white robes like Greek gods. And after all of that smoked salmon, my breath may smell like the hold of a Norwegian fishing boat, but I do expect my math skills to improve dramatically by the time we get back to Miami.

The news? I don’t know what’s going on right now. The only reason I know who won the Super Bowl was I happened to be walking through a bar during the final minute of the game, and stopped to see what all of the shouting was about. That’s a pretty good way to get it done. You may have spent 12 hours on Sunday watching pre-game, game and post-game analysis. I watched 51 seconds and got the whole story.

Here’s my tip on pre-game football shows: The keys to winning the Super Bowl are the same things those experts will tell you are the keys to winning an insignificant Cleveland Browns-Jacksonville Jaguars game.

This morning, good southern boy that he is, John Prine was standing in the fried-breakfast line in the cafeteria – a mass-nutrition event that last year one of the musicians called “the food tube.” So I went up to Prine, with my plate-load of salmon, and said “ ‘Lake Marie’ always makes me cry.” He smiled and said thank you. “I’ll bet I’m not the only person to say that to you,” I said. “No,” he replied, smiling humbly. “You’re not.”

I’ve been ashore, too. It feels strange. The first port of call was The Dominican Republic. It’s lush and mountainous, populated by the most relaxed dogs on the planet. I bought some cigars, of course, for my two- to three-a-year habit. I saw a cow using its hind leg to scratch behind its ear. I’d never seen that before. I guess Dominican cows are more limber than American cows. We took a bus up into the mountains. Racing along those narrow roads, all I could think of was the two words that see to appear most often in newspaper headlines from that end of the world: Bus plunge. We passed a crew laying some asphalt; a kid, maybe 14 years old, was pushing a wheelbarrow. At the police station, I saw men with automatic weapons, wearing fatigues. Sure, The Dominican Republic has a lot of trees and ferns. But if you really want to camouflage your troops in a place like that, disguise them as a mud hole. Or a dog.

There are a lot of poor people out there. It’s a world of poor people. I could see them through the window of our bus. Their houses look empty, their businesses look like sheds. It’s not like they’re choosing to live any way in particular. This is what they have. I was embarrassed, sitting in that air-conditioned vehicle, splashing down their muddy dirt roads, on vacation from our cruise-ship vacation. Ships that hold wonders these people will never see. Like $60 bottles of smooth single-malt scotch in the duty-free shop.

I have stuff. But I’m not a rich man. Seeing all of that poverty makes me wonder: How does a guy like Mitt Romney sleep at night?