Dead Skunk in the middle of the 21st century 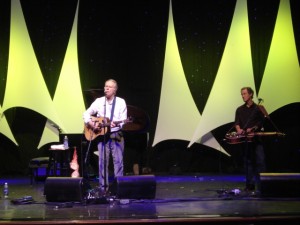 Loudon Wainwright and Greg Leisz prepare to bring a Dead Skunk into the room.

Loudon Wainwright III was nearing the end of his show when someone in the audience shouted out a request: “Dead Skunk!”

“I need more money for ‘Dead Skunk,’ ” Wainwright said, shaking his head with mock disapproval. No, he rarely plays his novelty hit from 1972, the only genuine hit he’s ever had. Guess Wainwright thinks a song about hitting a skunk while driving his station wagon is undignified. He’s moved on to some serious and beautiful music. And songs listing his medications and about being stalked by 400-pound fans and lamenting the loss of his sex life, the latter played while wearing a red stripper’s bra that had been left in the dressing room. So novelty is in the eye of the songwriter.

Well, that was Monday. And every man has his price. Friday night, as Wainwright was again nearing the end of his show, he paused to recall how a few nights earlier he’d dismissed his eager fan’s call for “Dead Skunk.” But Sixthman, the group that assembles Cayamo, this week-long Caribbean cruise of singer-songwriters, had approached Wainwright and basically said, “OK, we’re putting the money where your mouth is. Now play it.”

And he did. With help from his sister, Sloan Wainwright, renowned dobro stud Greg Leisz and the enthusiastic crowd that packed the Norwegian Pearl’s Stardust Theater. These people knew the words. They bought the 45 rpm single back in the day. I’m sure mine is in the attic.

A very specific generation dominates this event. Young acts like the Ryan Montbleau Band are rocking out on the pool deck. But older acts like the Richard Thompson Trio out-rocked them. I sometimes get the feeling that my music’s getting quieter as I age. But I haven’t lost the rage. And neither have a lot of the people I see around me.

Glen Phillips is a nice songwriter, sings well and has an incredibly winning stage persona. He’ll do a song or two by his old ’90s pop band, Toad the Wet Sprocket, but he’s been filling his sets here with lots of new material. You get the feeling this guy never stops writing. But Thursday evening, after a few pointed comments about the horrific field of un-presidential candidates being showcased by the Republican Party this season, Phillips played an old song that offered a vision of what American foreign policy might be like under one of these out-of-touch cowboys: Randy Newman’s “Political Science,” and the self-explanatory lines about “Let’s drop the Big One.”

A lot of people here knew that one as well.

I’ve seen Lucinda Williams a couple of times in the past year, and she’s been dredging up an old protest song from the ’60s, Buffalo Springfield’s “For What It’s Worth.”  She did it again Thursday night, explaining how it seemed relevant again today. She’s thinking about the Occupy movement. It’s quieted down a bit, as the northern cities become less forgiving with winter. Most of the Occupy news these days seems to come from mayors who decide to send in cops to hit their fellow Americans with sticks. Mayors who haven’t read the Constitution, and its guarantees of free speech and the right of assembly. Mayors who allow their local governments to chew away at the edges of those basic freedoms with local statutes that limit Americans’ use of their public spaces. Yes, Mayor, freedom is a messy thing. Lucinda Williams knows the Occupy folks will be back in the spring, and the movement will be messier than ever. Cops will hit their fellow Americans with sticks. Because, as both sides have seen, Occupy works.

I’ve included the lyrics to “For What It’s Worth” at the end of this post, so you can remind yourself of how relevant those old words remain.

Maybe revolution was in the ocean air because Thursday was tie-dye night on the ship, and some of the old hippie clothes came out. Including guys who didn’t need a peace-sign headband to keep their short, gray hair in place, but they wore one anyway. The past is a good thing to keep close at hand. It helps to remember that a dead skunk smells the same in1972 as it does today.

Friday night, after his show, Wainwright was eating at the Brazilian red-meat overload restaurant, sitting at a table just a few yards away from us. I make it a point to not bother celebrities when they’re trying to enjoy a private moment, but I did run into Sloan Wainwright and Leisz at the salad bar. “How much did they pay Loudon to sing ‘Dead Skunk?’ ” I asked.

Both pleaded ignorance. “He didn’t tell us,” Leisz insisted.

“You mean, he didn’t say, ‘Here’s your half, now let’s go out and embarrass ourselves?’ ” Leisz shook his head no. The secret was safe.

A half an hour later, a familiar song came over the ship’s PA system; they’ve been playing music by all of the artists on the cruise. This song was a young-sounding Wainwright, singing about a dead skunk in the middle of the road. Wainwright’s table erupted in laughter.

FOR WHAT IT’S WORTH

What it is ain’t exactly clear

There’s a man with a gun over there

Tellin’ me, I got to beware

I think it’s time we stop, children, what’s that sound

Gettin’ so much resistance from behind

I think it’s time we stop, hey, what’s that sound?

What a field day for the heat (Hmm, hmm, hmm)

A thousand people in the street (Hmm, hmm, hmm)

Mostly say, hooray for our side (Hmm, hmm, hmm)

Into your life it will creep

It starts when you’re always afraid

You step out of line, the man come and take you away 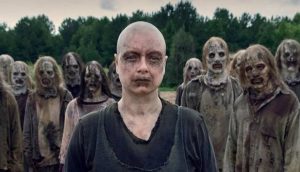 Don’t mess with zombies. The Walking Dead ends next year after 11 seasons. I’ve watched a total of 10 minutes. I’m not sure I would have learned anything Night of the Living Dead didn’t warn me about.

BritBox. My capsule review of all the shows on the cable network devoted to British TV: Quirky, whimsical English person solves murders. Total up all of the bodies on BritBox and you’d have roughly the population of Liverpool.

As a baseball fan… I have yet to watch a game of this weird season played before no fans.